1. Mold Temperature and Heat Flux Measurements During the Production of Glass Containers. The rate at which glass and more particularly the surface layers of the glass, are cooled while in contact with the forming mold is of great importance in the manufacture of glass containers and pressed ware. Until recently, the difficulty in measuring the transient temperature changes in the actual forming operations has limited both the understanding and the control of the heat transfer.

Thermocouples of very fine diameter have been embedded in the glass for measuring the glass temperatures, but the interpretation of such measurements in a material such as glass with rapidly varying temperature gradients within it is quite difficult.

Commercially available radiation pyrometers are severely limited by the lack of access to the forming mold to view the hot glass. Also, numerical methods for computing surface heat fluxes from measured temperatures in a mold initially at a uniform temperature are of limited value because in many molding operations the mold is not at an initial uniform temperature.

Mr. Roger Kent of the British Glass Industry Research Association (Ref. b ) has designed a uni-dimensional heat flow system subjected to a transient heat input into one face. This requires that the temperature time variations at two suitable points in the mold be measured. It was accomplished by installing two thermocouples in the mold wait. A Nanmac surface thermocouple was used to measure the variation of the mold surface temperature continuously. The thermocouple body is of the same material as the mold and the sensing surface was mounted normal to the glass contact interface. This thermocouple has to meet two main requirements. It has to have a high speed of response so that it accurately follows the transient temperature changes occurring at the mold surface. Also, it must simulate the wall surface with minimum distortion of the existing heat flow pattern in the mold. In laboratory tests conducted by Mr. Kent, the Nanmac surface thermocouple met both of these requirements very faithfully.

The second thermocouple was mounted at a discreet location within the mold wall, such that its junction was near the same axis as the surface thermocouple. This embedded thermocouple consisted of an oxide insulated ungrounded metallic sheathed thermocouple similar to Nanopak units.

Fig. 1 is a sketch showing the installation to the surface thermocouple, and Fig. 2 shows the temperature/time history of a typical glass molding cycle. The initial surface temperature of the molten glass was about 1015°C. The temperature variation has the expected general form; i.e. a rapid initial temperature rise following gob feed and the smooth exponential decrease after the blank mold opens.

However, there are two distinct discontinuities; one at the time the settle blow is taken off, and the other following application of the counter blow. It is inferred that a physical separation of the glass from the blank mold occurs at the point measured when the settle blow is taken off. Contact is restored immediately when the counter blow is put on. The mold surface changes by 75°C. Within the forming cycle when the maximum surface temperature is about 605°C.

From data such as this, the complete heat flux history can be studied including the effects of mold lubricants, rapid chilling of the molten glass, application and removal of the settle blow, plunger withdrawal, etc. and the interactions of these variables. The interrelationship between these variations in heat flux and machine timing suggests that the various forming operations alter the degree of physical contact established between the glass and the blank mold surfaces.

Increasing production speeds and the requirement for lighter products in the glass industry have emphasized the need for more effective control over the forming process to obtain greater control of the dimensional variants of the end product. The measurement of mold temperatures can be used to control the cooling air plunger temperature, dwell time, and pressing pressure. The effective control of the heat transfer can regulate the application of the lubricants and determine their functions more accurately. 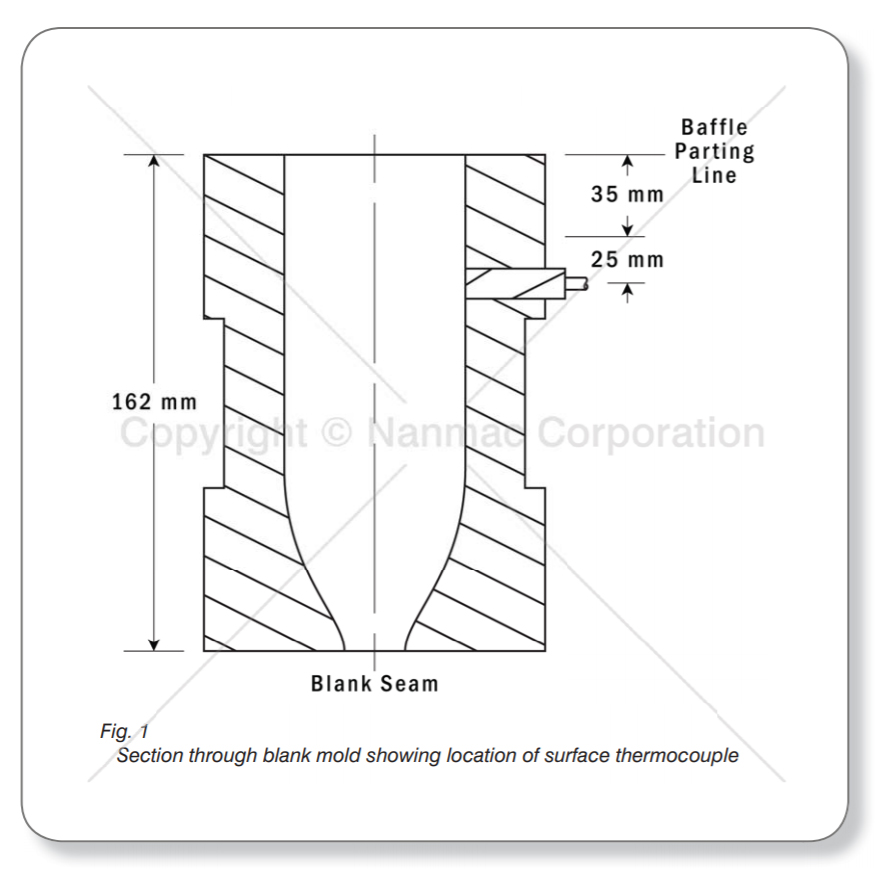